Book Review: Her Body and Other Parties, Carmen Maria Machado 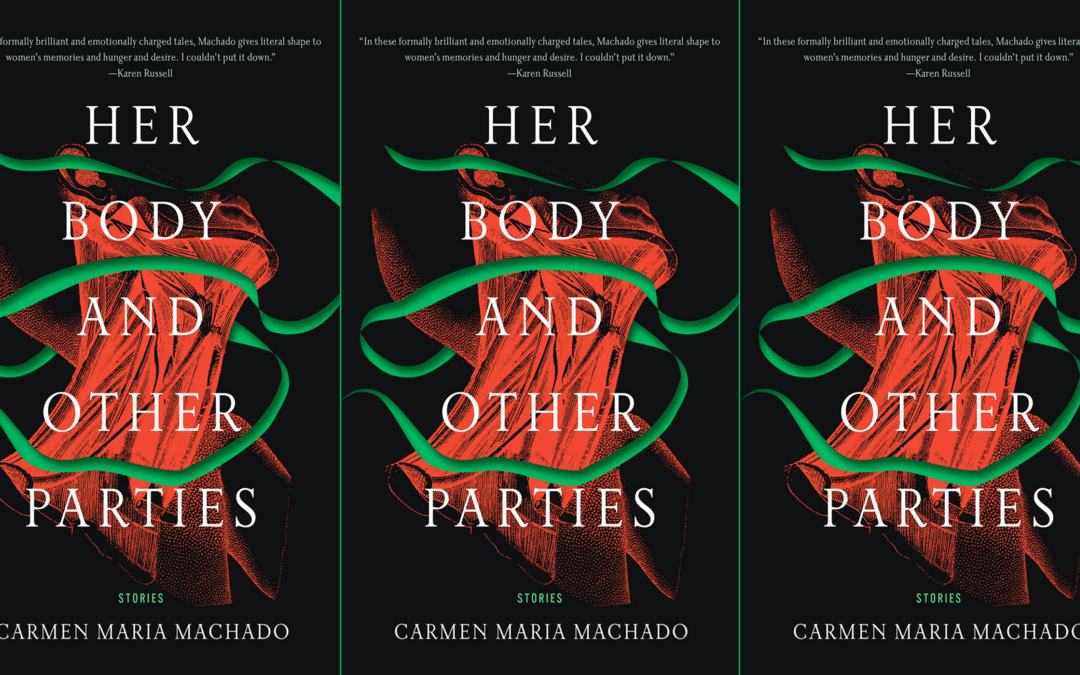 If you’ve ever wondered what the Grimm’s Fairy Tales would be like if they were written by a female and released smack dab in the middle of Trump’s presidency, you need to grab yourself a copy of Carmen Maria Machado’s debut short story collection. Her Body and Other Parties is a book that knows its roots but transcends them to form narratives that belong to no one else but its female protagonists. Its eight short stories use horror and science fiction as vehicles to address domestic and sexual violence, eating disorders and mental health, impossible and oxymoronic expectations placed on women every day, and other problems women face that will never end up on the Disney channel (at least not in this lifetime).

Machado’s work draws frequent comparisons with the reworked fairy tales of Angela Carter, and something tells me she’s totally fine with that. The book’s first story, “The Husband Stitch” is a grownup retelling of Alvin Schwartz’s “The Green Ribbon” (which was itself a retelling of Washington Irving’s 1824 short story “The Adventure of the German Student”). Boldly named after a surgical procedure in which extra sutures are used to tighten a woman’s vaginal opening following an episiotomy, “The Husband Stitch” recounts a marriage like any other, except in this marriage, of course, the woman has one part of her that is just for her: the green ribbon around her neck.

Instead of simply retelling an urban legend, “The Husband Stitch” brings other urban legends into its urban legend and directs its readers on how to tell its story. We are told tales of a girl who resurrects a sleeping corpse, a girl who unwittingly wears a corpse’s wedding dress, a girl who died in a trunk on her wedding day, and well, you get the picture. From the very first line, Machado makes it known that the girls in these urban legends, as well as her main protagonist, are not unique specimens. “If you read this story out loud, please use the following voices: Me: as a child, high-pitched, forgettable; as a woman, the same.” And then, after giving more robust voices to her husband, father, and son, “All other women: interchangeable with my own.” “The Husband Stitch” sets the book’s tone. Sex, death, and violence are dominant themes in every story, although some stories use them with more tenderness than others.

For example, “Inventory” and “Real Women Have Bodies” are stories of love and loss. In both, pandemics decimate the population as the female protagonists watch their lovers waste away before their eyes. While “Inventory” is written with a beautiful attention to detail and a rhythm that falls over you like waves, I much preferred “Real Women Have Bodies” for its creative, multi-layered premise. The pandemic in “Inventory” is reminiscent of what the world is currently experiencing with COVID-19: a mysterious illness that knows no boundary. “Real Women Have Bodies,” on the other hand, is about a pandemic that only affects women, dissolving their bodies from the outside in until they are completely transparent. What happens to them when they’re invisible is mostly left up to the reader to decide. Using a clothing store as the story’s setting, Machado creates a world you might find in a Cronenberg film. These stories work as love stories because death is a force outside human control.

“Mothers,” “Especially Heinous,” and “Difficult at Parties” use elements of magical realism to explore the darker side of sex, exposing the lasting impact of sexual violence. In “Mothers,” a miraculously conceived child becomes a symbol of an abusive same-sex relationship. In “Difficult at Parties,” a woman who has recently survived a sexual assault discovers she can hear the inner thoughts of porn stars. “Especially Heinous” is an ambitious attempt – one that sometimes falls flat – to rewrite all 272 episodes of Law & Order: SVU in a paragraph or less from the perspectives of Benson and Stabler. These stories embrace their difficult subject matter but refuse to delve into utter hopelessness, grasping for straws of hope in coworkers, spouses, and children that may or may not exist.

“Eight Bites” and “The Resident” depict mental illness, gender expectations, and the way desire and sex are irrevocably intertwined with self-esteem and concerns about the body. In “Eight Bites,” a woman is convinced by her sisters (and society at large) to undergo bariatric surgery, ruining her relationship with both herself and her similarly-sized daughter in the process. “The Resident” is a Victorianesque ghost story set at a Writer’s Colony. I won’t give any more away, but I will say literary types and fans of Jane Eyre will get a kick out of it.

Part of what makes Her Body and Other Parties so special is not only the stories themselves but also how they are woven together. “The Husband Stitch” is a twisted fairytale that assaults you immediately. “Inventory” takes a step back to let you recover your breath before plunging you back into the deep end with “Mothers” (arguably the saddest story in the book). The book’s chronology, coupled with Machado’s unusual mode of storytelling, produce a powerful experience that would not be possible within the confines of traditional narrative fiction.