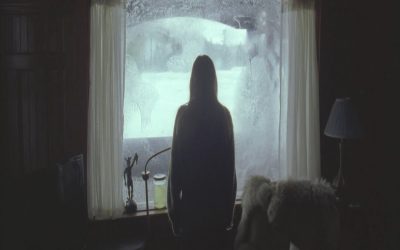 Grief is a messy thing. In the last decade or so, directors like Ari Aster (Hereditary, Midsommar), Jennifer Kent (The Babadook, The Nightingale), J.A. Bayona (The Orphanage), and Lars von Trier (Antichrist, Melancholia), have demonstrated that if grief has a face, perhaps horror is the genre most suited to capturing it. Veronika Franz and Severin Fiala were already on the list of grief-obsessed directors, but The Lodge, the follow-up to their debut feature film Goodnight Mommy (also about grief, but a bit sloppier in my humble opinion), wins them a place on my own personal “best-of grief and horror” list.

There isn’t much I can say about The Lodge without giving away spoilers so I’ll choose my words wisely and say every character to grace the screen goes through all 5 stages of grief (not necessarily in their intended order) before the movie ends. The camera, meanwhile, is unrelenting. Their stoic gazes in the face of its lens seem meticulously practiced, as if they’re embarrassed to give the viewers exactly what’s expected of them. Along those lines, I can tell you to leave your expectations at the door. Just when you think you know where the movie is headed, it takes another winding turn, ending on a note that had our entire theater departing in silence, like the guests at the funeral towards the film’s beginning.

The Lodge follows two children, Aiden (Jaeden Lieberher) and Mia (Lia McHugh) who experience the collapse of their nuclear family in the most heartwrenching way. After their father (Richard Armitage) leaves their mother (Alicia Silverstone) for a younger woman, the children focus their rage on the other woman, Grace, the lone survivor of a Catholic separatist cult in which her father led 38 followers to commit mass suicide with the word “sin” duct-taped over their mouths. By the time we meet Grace, played by a polite, awkward Riley Keough, we’ve already seen video footage of the mass suicide’s aftermath and the legacy (by way of dead bodies) her father left behind. Grace’s delicate demeanor soon begins to shift when events start to occur that cannot be explained.

From about five minutes in, The Lodge is an uneasy watch, from its first shocking scene (if you’ve seen it, you know what I mean) to its bleak, desperate ending. The camera alternates between long, slow zooms and wide, sweeping panoramic shots, skillfully emoting both loneliness and claustrophobia in a house that feels too small to exist in the midst of a seemingly neverending winter … uh, wonderland?

No, not wonderland. Even in the midst of an ice-skating scene with the children and their father, you never feel truly lulled back from the edge of their grief.

At a glance, you’d think Franz and Fiala paid serious homage to Ari Aster’s Hereditary with both their subject matter and thematic motifs. Their disorienting use of a doll house is reminiscent of Annie’s (an Oscar-worthy performance by Toni Collette) miniature art collections. This comparison would be easy to make had The Lodge not already been in production before Herediary was released. The architecture isn’t the only thing about The Lodge that feels borrowed-from-Aster-yet-not, though. The cult theme, unreliable narrators, and even the movie’s pacing all give off a similar vibe. Both films rely on content as opposed to noise to spook their audience, and as a result have been labeled “disturbing” as opposed to the more traditional “scary” adjective associated with the horror genre.

At the end of the day though, The Lodge is a film that stands on its own. Although Hereditary hints at its events being orchestrated, its ending left viewers with a slew of unanswered questions (not necessarily a bad thing). The Lodge, on the other hand, ends on a note that leaves little room for ambiguity yet we can’t help but sympathize with each character’s plight no matter how horrid their actions. Don’t watch this movie if you’re depressed (I made the mistake of watching Hereditary the day after my grandma’s funeral – just don’t do it), but give it a try if you’re interested in exploring an unbiased take on the different ways trauma can unravel a human.