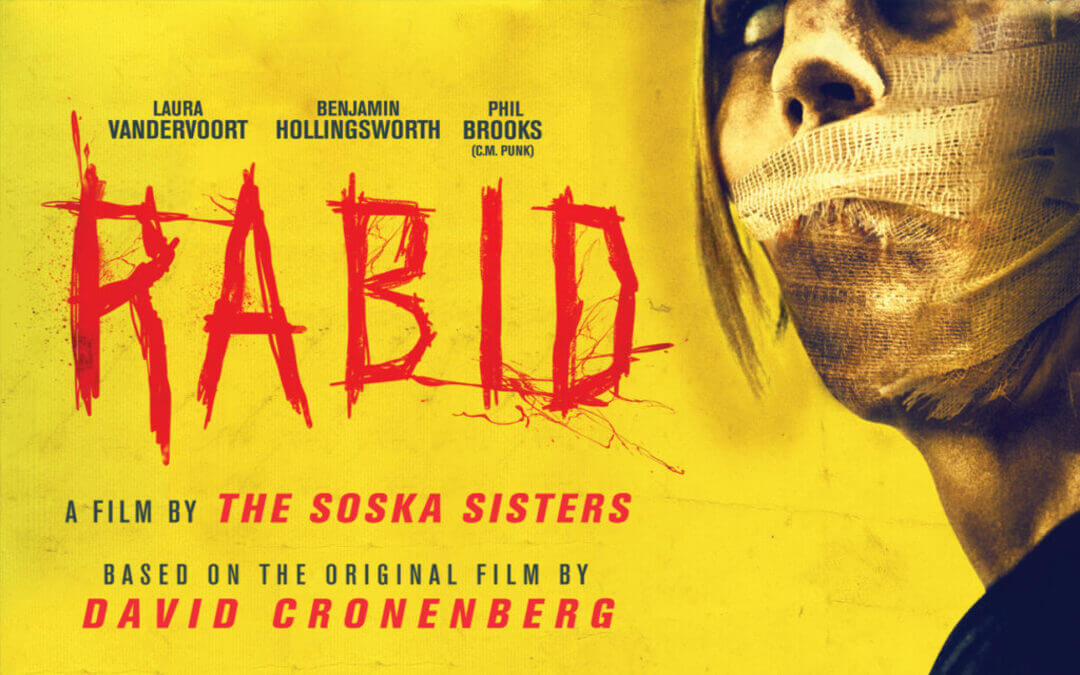 Contrary to popular opinion, I preferred the Soska Sisters’ version of Rabid to the Cronenberg version (although it’s worth noting that I’m a rabid fan of the sisters … see what I did there?). I delighted in their feminist rewrite of the ending and got to thinking about other female directors who have subverted and reinvented conventional horror movie tropes, especially in the past decade or two. In honor of women’s history month, I’m going to dive into different horror subgenres and explore some female directors who (subjectively speaking) outdid their male counterparts. Make sure you check back throughout the month for more posts in this series. Today’s subgenre is …

Body horror – a term first coined by Phillip Brophy in his 1983 article “Horrality: The Textuality of the Contemporary Horror Film” – is a subgenre of horror that displays the body as grotesque in some way, shape, or mutated form. Although David Cronenberg is known as the grandfather of the body horror subgenre, societal pressures placed on women (along with a near constant fear of ending up in the wrong place at the wrong time) have fostered a more intimate relationship with corporeal anxieties that, frankly, the male population just can’t relate to. Don’t believe me? Watch Rabid (1977) and Rabid (2019) back to back. Sure, Cronenberg’s version takes the cake on the gross-out factor (although the Soska Sisters’ version definitely has its moments), but what his version lacks in plot, their version more than makes up for with its well-developed characters and empathetic setting. Rabid (2019) is a love letter in a bottle tossed into an ocean of women who struggle with writing their own narratives.

The Soska Sisters’ Rabid takes transhumanism to new heights. More rewrite than reboot, the film is equal parts subtle and extreme, mixing horror, humor, and cynicism into a mind-reeling (though at times languidly-paced) experience from start to finish. Their film stands on its own despite inevitable comparisons to the original (many of which were unfairly yet predictably negative). Using the fashion industry as a backdrop, the Sisters’ version of Rabid makes a statement about self-agency in a world that values a pretty face above all else. At House of Gunter, the women are the clothes but a man is their maker (at least at first).

A consistent problem with David Cronenberg’s otherwise exquisitely bizarre work is where he places the blame. In films like Shivers, Rabid, and The Brood, the male doctors make female patients their unwitting guinea pigs in disturbing medical procedures and then blame the test subject when things (predictably) don’t go as planned (especially in The Brood, when even a child can’t escape the fate of turning into her hated mother). In Dead Ringers, the male doctor (named Beverly, in case you were wondering), insists it is “women who are wrong” during a particularly disturbing scene with makeshift gynecological tools. The Soska Sisters, in their part, rewrite this tired narrative and call the male “creator” out directly with their update to the original ending.

If you’ve never seen Rabid before, the plot goes something like this: woman gets into motorcycle accident. Woman is saved by mad scientist through medical experiment gone wrong. Woman now attacks men and drinks their blood through new armpit phallus limb. Men turn into zombies. Woman doesn’t believe she’s responsible for epidemic. Woman does something dumb and ends up in a dumpster.

In the Sisters’ tale, Rose (Laura Vandervoort) feels ugly even before her accident. Unlike her best friend and adoptive sister Chelsea (Hanneke Talbot), Rose never wanted to be a model; she just wanted to dress them. Unfortunately, the business of fashion design proves no less vapid than fashion modeling. Rose’s boss Gunter (Mackenzie Gray), head honcho and lead fashion designer, not only fails to notice her but goes as far as to mock her, as does just about everybody else in her life (including the Twisted Sisters themselves in an amusingly catty cameo). Everybody, that is, except Chelsea, which is why the biggest blow comes when Rose finds out Chelsea paid Rose’s secret crush Brad (Ben Hollingsworth) to go on a date with her. In fact, it is this major disappointment that lands Rose in the hospital after a failed attempt to flee the scene of the party where she was humiliated.

From this moment on, the film is no longer a Cronenberg remake but a Soska Sisters original. (Well, maybe from the moment after the surgery on, since the surgeons’ red vinyl smocks were an obvious nod to Dead Ringers.) As Rose recovers from her surgery, she radiates a confidence that is not lost on the world around her. From Gunter fawning over her work to bouncers letting her skip the line on the nightclub circuit, Rose is a new woman. A new woman with a new craving of course: blood. And her craving isn’t only a craving; it’s the only thing her new stomach can digest. If you’ve ever been chubby and successfully dieted, I’m sure you can empathize with Rose’s condition.

Since self-agency is a major theme in Rabid, Rose’s character does her best to fight her urges, only to realize that she must eventually succumb to them if she is to survive. Increasingly violent dream sequences serve to both portray Rose’s subconscious desires and disorient the viewer. At times, it was difficult to discern the dreams from reality. Depending on who you ask, this can be either a good thing or a bad thing.

Unlike the original, the infected men in this version don’t develop symptoms immediately. Whether intentional or not, one can’t help but think of sexual assault victims. Sometimes what transpired doesn’t sink in immediately. By the time it does, it’s too late to present a believable story to law enforcement and often too late to prevent someone else from falling victim to the same fate. The male characters are so cringe-worthy that you root for their demise. In 1977, their displays of toxic masculinity might have gone unnoticed (or be panned as unrealistic) but in the Me Too era, we (meaning women) might view them the same way we’d view a coworker or neighbor after a semi-creepy-but-not-creepy-enough-to-call-the-authorities encounter.

The ending of the new Rabid is what makes the film truly special. The chaotic climax’s aesthetically magnificent, gore-heavy fashion show is exactly what you’d expect from the twins, but unlike Cronenberg’s Rose (played by the charismatic Marilyn Chambers), Vandervoort’s character fights for her free will, attempting to kill herself before the crazed Dr. William Burroughs (Ted Atherton) could spread her infection any further. To the distress of both Rose and her audience, however, her internal parasite brings her back to life, meaning the doctor would have his way and the world as she knew it would be destroyed. The new ending is as devastating as it is effective, Schadenfreude in its truest sense.

At the end of the day, there are two schools of thought on the new Rabid. Critics of the remake have echoed the words of Gunter: Why do we keep remaking old trends? Fans of the Soska Sisters take offense at the word “remake.”

If you’ve love body horror films but have already seen the original Rabid and are a remake purist, try American Mary, their second movie but arguably the first movie to open the door in body horror for Jen and Sylvia Soska.